The Hazelcast .NET1 Client is provided as a library that is supported on .NET (Framework) version 4.6.2 to 4.8, .NET (Core) 3.1, and .NET (Just .NET) 5.0 and 6.0. For .NET Core and Just .NET, the library is supported both on Windows and on Linux. This means that we want to run our complete tests suite on both platforms, for each supported .NET version.

Originally, we defined a Build PR workflow that would trigger on each PR and build and run the tests for each .NET version supported by the platform, one after another. In order to test both platforms, we used an OS matrix strategy:

Thanks to this, on each PR, two jobs would run in parallel: one for Linux, and one for Windows. However, on each platform, the tests for each .NET version would run sequentially. And thus... if the complete tests suite takes about 20 minutes to run, the Windows job would take net462 + net48 + netcoreapp3.1 + net5.0 + net6.0 = 5 times 20 minutes, or 1h40. Which is quite a lot of time to validate a PR.

In our situation, however, the list of versions to put in the dotnet dimension if not fixed and actually depends on the OS. We would need to write something akin to the following code, where get_dotnet_version would be a function returning the .NET version corresponding to the OS:

Alas, GitHub does not support that type of construct. The only thing it supports is referencing a variable, such as an input, in the matrix. So we would need to be able to produce a unique variable, and yet its value would depend on matrix.os... again, that type of construct is not supported. All in all, I could not find a way to get one matrix dimension to depend on the other, within one workflow.

Now... what-if instead of trying to do everything in one workflow, we used two? Our first workflow looks like:

Let's go through this workflow. It contains two jobs, getversions and buildtest.

The first job, getversions, runs a unique step that determines the versions based on the platform, and sets a job output variable accordingly. That variable contains a JSON list of versions, e.g. [ "net462", "net48" ]. Actually, it sets one job output per platform, and I could not find a way to avoid hard-coding the platform names.

The second job, buildtest, does not run any steps, but instead triggers another workflow, passing two input parameters: the platform, and the list of versions. And this is where we manage to specify versions that depend on the platform.

And then, the magic happens in that other workflow. First, in order to be "callable" with input parameters, it requires this on statement:

And then its job is defined as:

And there we have it: a build and test job that runs on the specified platform, for each specified versions. The last piece of the puzzle consists in wrapping in all into one single conclusion point. This is done via an additional job in the first workflow:

This job "needs" the buildtest job, in other words it will only run once all our forked build & test jobs have completed. It always run, and succeeds or fails depending on the outputs of all the forked jobs. This means that this is what we see in GitHub actions: 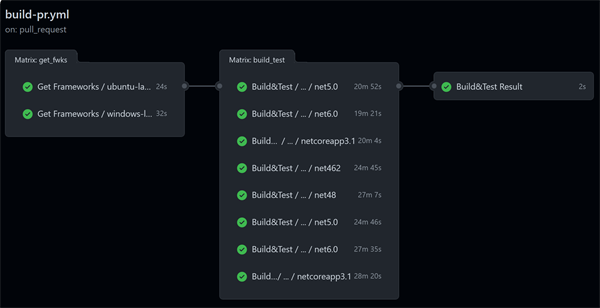 The block to the left shows the two jobs that run, on per platform, and figure out the framework versions for each platform. The center block shows each combination of platform / version build - they all run in parallel. Finally, the block to the right shows the global status of the build.

That last "Build&Test Result" block can be used as a required check in our GitHub branch configuration, thus ensuring that all test combinations must be successful before any PR can be merged.